It is Animal Health Week from Oct 2nd to October 8th, 2016. The slogan to this campaign is “One Health – Animal Health + Human Health + Planet Health” and The Canadian Veterinary Medical Association will be putting the spotlight on preventative health exams and responsible pet ownership. Healthy pets are much less likely to carry diseases that can infect people.

I thought it would be fun to add a twist of my own during this campaign by looking at the health benefits of pet ownership to people. There is an increasing amount of research and anecdotal evidence on the subject. According to the CDC (Centers for Disease Control) and the NIH (National Institute of Health), the health benefits are both from a physical and psychological point of view.

The health benefits can possibly be explained by hormonal and chemical changes in our bodies associated to spending time with our pets, such as increasing endorphins and neurotransmitters in our brains and lowering cortisol levels. From an emotional point of view, we all know what great company they are and how entertaining they can be.

Petting an animal, or watching fish swim in a tank, can lower your heart rate and blood pressure. The presence of pets can also lower cholesterol levels, triglyceride levels, anxiety and feelings of loneliness or depression. Dr. Edward Creagan, an oncologist at the Mayo Clinic, was quoted saying, “A pet is medication without side effects that has so many benefits. I can’t always explain it myself, but for years now I’ve seen how instances of having a pet is like an effective drug. It really does help people.” He even writes the name of the patient’s pet in their medical file.

Scientists looked at 421 heart attack victims and found that 1 year after their myocardial infractions, dog owners had a higher survival rate. One interesting study on Alzheimer’s patients showed that they had fewer anxious outbursts if an animal is present. Another study looked at the effects of pet ownership on 48 stockbrokers who were taking medication for hypertension. The 24 who were given a pet had a more significant reduction in high blood pressure accompanying stress than those without pets. 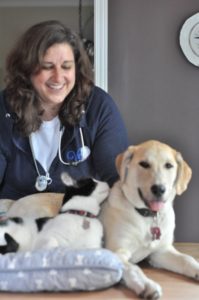 Pets can increase your opportunities for exercise and outdoor activities as well as opportunities for socialization and have even been coined as date magnets by some. People are certainly more likely to start a conversation with you when you are accompanied by a furry friend. According to one health magazine, dog owners were more likely to complete the recommended minimum 150 minutes of exercise per week.

Some argue more research is needed, but for those of us who have experienced the joys of bonding with an animal, whatever species it be, don’t need to be convinced of that warm and content feeling we get in their presence. That in itself is a huge benefit.